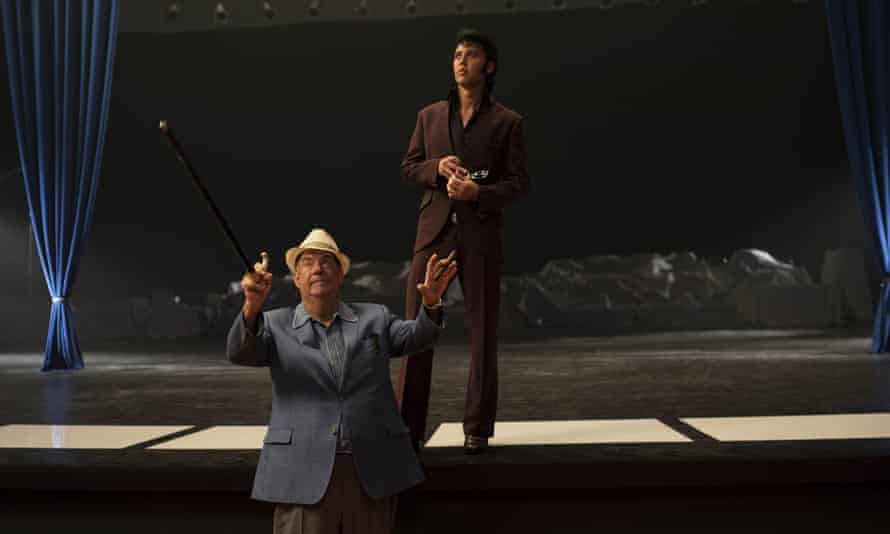 The Wonder of You

Austin Butler sparkles in the lead role, but perhaps Baz Luhrmann’s high-octane, live-action graphic novel should not be called a “biopic” at all. For a start, if you want to talk about the life of Presley, there are plenty of omissions: his time at Humes high school, most of his Sun Records career, his rockabilly peers, studio sessions, personal interest in mystic literature, Lake Tahoe residences, and, of course, the sorry descent of his final years.

Other things, such as his love of martial arts, get only a brief mention. What biographic material the director does include is given dramatic licence. When Presley plays Jacksonville in 1956, for example, he is arrested on stage for his show; in reality, he was only threatened with arrest. Equally, when in the film Presley meets 1968 Comeback Special director Steve Binder, he sits in the “O” of the Hollywood sign rather than merely visiting Binder’s LA office. This movie plays fast and loose with the facts.

Baby What You Want Me to Do

One way to unravel the film’s approach is to consider that, far from being an objective account, Elvis offers the perspective of manager Colonel Tom Parker (Tom Hanks). Many other established figures are erased from the picture including the 1956 Million Dollar Quartet, Frank Sinatra (the co-star of Presley’s post-army ABC Timex Special), and the Beatles (who visited Elvis’s house on Perugia Way in 1965). How true to life is Tom Hank’s Colonel Tom? In the film, he’s portrayed as a sentimental svengali whose voice purrs in Transylvanian tones and whose eyes regularly seem about to weep with blocked emotion; not the dead-eyed hustler whose bamboozling “snowman” facade put a spin on a life spent serving Elvis, showbusiness, and ultimately himself. But Elvis is not wholly the manager’s story. Apart from one key deal cut in Las Vegas, there is little reference to any business figure – neither RCA’s Steve Sholes, publisher Jean Aberbach nor movie mogul Hal B Wallis – with whom Parker had dealings. Beyond his client’s big paydays, we get few of the highs or lows of Parker’s working life, such as the time he sold the rights to Elvis’s back catalogue to RCA in 1973 for a pitiful few million dollars. What Luhrmann offers instead is a series of vignettes tracing the ebb and flow of the Parker-Presley partnership. Bonded by the American dream, the two men are relentlessly attacked by their personal demons and eventually fall apart.

In Elvis, the strange sentimental-financial relationship between the manager and his client is located in bonds of family reconstituted by business. Presley’s mother is painted as a strong woman who passes after she is consumed by fear for her son’s welfare. In her absence, Parker emerges as the role model that Presley never had because his real father Vernon lacked the nerve to step up. Meanwhile, a boyish Presley meanders between the two remaining female forces that hold sway on his life: his wife Priscilla, and his legion of ecstatic fans. Priscilla is the only lover who gets any recognition, and even then, the awkward post-Germany, pre-marriage years are glossed over. She eventually leaves Presley here, not just because of his infidelities, but because of his pill habit. Later girlfriends – such as Linda Thompson and Ginger Alden – are written out of the picture, reminding us that Luhrmann’s Elvis does work in managing the King’s image. Ultimately, Parker gets to argue that Presley imploded not just because he was, as the film’s final captions suggests, “financially abused” by his manager, but also because he and his audience loved each other too much.

It is on the territory of race that Luhrmann’s film makes its most interesting argument. Early on we see a young Presley catch a glimpse of Arthur Crudup playing blues in a Tupelo juke joint. We then see Presley baptised in a frenzy at a local Black church tent revival. When he grows up, he visits a composite Beale Street where Big Mama Thornton, Sister Rosetta Tharpe and Little Richard all play, in one club, on the same bill. The A-side of Presley’s first single, a reworking of Crudup’s That’s All Right, becomes symbolic of Presley’s sincere grasp of the spirit of Black music. Its more countrified, though equally popular B-side, Blue Moon of Kentucky, is all but forgotten. Of course, this is not fully accurate. A young Presley might have overheard Black musicians playing on the porches of his childhood neighbourhood and in the tent show that regularly pitched up near the Presley’s home when they lived in Tupelo on North Green Street. In Memphis, he heard R’n’B on the radio and Black gospel at East Trigg Baptist church. There are no obvious, verified reports, however, of Presley peering directly into juke joints as a child, or being blessed in Black tent revivals. In the film, when Parker questions his client’s reaction to the death of Martin Luther King, we realise Presley is sincere. His association with Black music can therefore be located as genuine homage, with Parker, due to his tendency to inflict “financial abuse,” sacrificially carrying off any whiff of racial appropriation. Presley comes of age by replacing his fake-father’s “safe” (white) Christmas songs on the ’68 Special with (Black) leather-clad blues, but his embodiment of the social and racial complexities of America mean that he loses his way in the ensuing years.

Far superior to any other Presley screen story, Luhrmann’s luminous project makes up in pace and glamour what it lacks in historical accuracy.