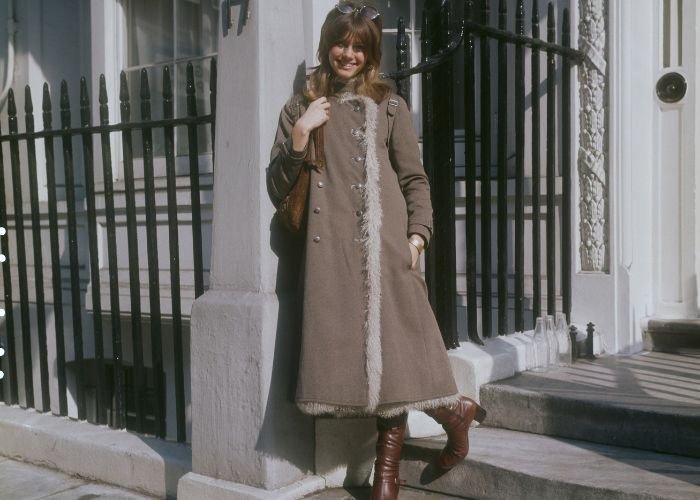 The late but legendary Olivia Newton-John, born in 1948, might have technically been a boomer, but no other generation adored or was influenced by the Australian superstar quite like GenX. As the actress and singer rose to stardom, she also solidified her place in our childhood memories.

This is due in no small part to her iconic role of Sandy in the 1978 movie Grease. From her perfectly preppy looks to the black leather bodysuit she wore in the finale, Newton-John was the first style icon for many of us.

But her influence didn’t stop with Grease. The star served up even more iconic looks throughout her career, blazing trails and setting trends through the ‘70s, ‘80s, and beyond.

Before there was Sandy, there was Sing Sing Sing. A 16-year-old Newton-John won the TV talent contest in 1964, kickstarting a successful music career. The singer embraced the hip fashion of the early ‘70s, including oversized glasses, fur-lined polo coats, and a wolf cut—decades before we would even call it that.

As neutral earth tones made way for vivid color palettes, Newton-John followed suit. Her onstage ensembles were as dazzling as the performance itself, and this shimmery lilac leather combo is certainly no exception. She also grew out her shaggy chop into a voluminous golden blonde that was perfectly on-trend for the mid-’70s.

In 1978, Grease was released, and Newton-John cemented herself in international icondom. And with a wardrobe like that, how could she not? The bouncy perm, the catsuits, the scarves, the bold lips—she encouraged us to embrace our femininity in all its daring, sexy, timeless glory.

Then came Xanadu, an equally delightful movie musical often overshadowed by its Rydell High predecessor. Newton-John had her fair share of iconic looks in this film, too—including this fringe and knee-high boot ensemble. It was campy, flirty, and fun: three major style points of the late ‘70s and early ‘80s.

With the ‘80s came Olivia’s classic hit, Physical. She rocked neon athletic wear and, of course, the classic forehead sweatband in her music video. But she kept up her 1980s style off-screen, too. In a 1982 performance in Chicago, Newton-John swapped her sweatband for blue eyeshadow and rocked a teased, textured hairstyle.

Newton-John continued to embody the trends of the day into the ‘90s, trading in her spandex for loose-fitting leisure suits and a more subdued, shoulder-length haircut. (Complete with her iconic bangs, of course—when you know what works, you know what works.)

No one was immune to the at-times-chaotic fashion of the early 2000s, not even Olivia Newton-John. Still, she managed to make these mismatched, asymmetrical trends look polished, classy, and chic.

Olivia Newton-John passed away peacefully in her California home after a decades-long battle with breast cancer. We’ll not only remember her for her classic movie roles, music videos, and fashion, but we’ll also remember her activism, compassion, and that trademark, million-watt smile.